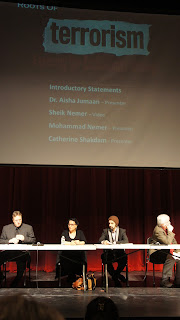 The five speakers at the conference had all varying points of view around the the topic of U.S./Saudi relations. The first two speakers had a view from perspective of being from the Arabian Peninsula, while the last three scholars had unique American views of the relationship.

In short, one could classify the two perspectives as those struggling for liberation of the Arabian Peninsula from Saudi terror and trying to preserve and/or enhance American liberty in post-911 atmosphere of degrading Constitutional rights. 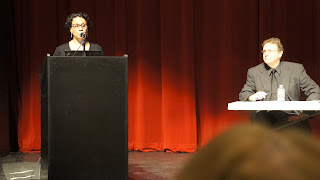 The first speaker, Dr. Aisha Jumaan, offered a statistically detailed presentation of the human catastrophe going on in Yemen, as a result of the Saudi imposed war on that ancient country. More than fourteen million people require immediate humanitarian assistance and seven million are at risk of famine.

The Saudi war on Yemen has been going for three years, now; far beyond the expected three months the Saudis expected it to be over. The Saudis have, bombed hospitals and the Yemeni nations infrastructure, which bears responsibility for the continuing human tragedy.

Nevertheless, Yemen was never colonized and as an ancient country has a very die-hard, independent spirit, which remained free, even of Islamic Caliphates. In the end, we as Americans bear responsibility for aiding and supplying the Saudis to cause this great human tragedy. 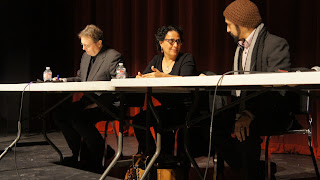 The second speaker, Mohammed al-Nemer, is a mechanical engineer and son of famed martyred Sheikh al-Nemer who was executed by the Saudi regime for his speaking out on Shia oppression under Saudi rule.

He pointed out the role the british empire played in bringing about Saudi rule over the Arabian Peninsula. As the defeat of the Ottoman Empire by British imperialism in World War One, left three distinct authorities in the Arabian peninsula:

They helped the British in WWI to bring down the Ottoman empire. And, soon after the war the British were looking to see who would be their partner in implementing the Balfour Declaration, which had promised Palestine to Zionists.

In short, the only one of the trio to covertly concede, to formation of Zionist entity in Palestine was Ibn Saud and his Wahhabis. Thus, the British aided Ibn Saud against the others to take over the Arabian Peninsula.

The Saudis were backed by the United States to form the Taliban in their fight against Communism. Furthermore, what ISIS has done today is what ibn Saud did in establishing Saudi Arabia. In this light, the Saudi justification for the war on Yemen is intolerance.

The time has come for us to bring democracy to the Arabian Peninsula. It is our turn to influence the Saudi regime through our presence and influence in the West. If not us, then who will make this change.

Then there was a pre-recorded interview with Senator Richard Black, who gave a brief history of U.S.-Saudi relations from 1945, when FDR cut an oil deal. Senator Black pointed out the Saudi regime is one the most barbaric on Earth, who did not end slavery until 1962.

The Senator, further pointed out that even-though Iran is blamed for “terrorism,” it is the Saudis that are the real culprits, who teach and preach it through Wahhabism. And, it is a shame that these are our big allies.

He wished for peace in the “Middle-East,” and recommended the audience to find the truth via source documents, such as Wikileaks. Truth is what we need, to restore honor of the United States. “Let’s change directions, right now.” 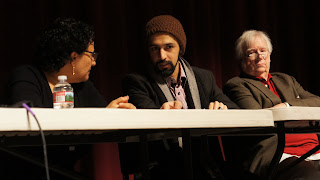 The third speaker was Jim Fetzer, who was Professor Emeritus of the philosophy of science at the University of Minnesota Duluth, a Truth scholar who is concerned with loss of liberties and undermining of Constitutional Rights in United States, since 911.

He questioned why we remain in the “Middle-East,” but to implement a master plan for a “New Middle-East.” And, listed ten goals that U.S.-Israelis pursue through their presence in Syria. All as part of neocon plan to make regime change in seven predominantly Muslim nations in region, exposed by General Wesley Clark.

Mr. Fetzer has investigated Kennedy assassination and events of 911, coming to conclusion that we have been lied to about the nature of those events. Mr. Fetzer has become an expert in uncovering anomalies in reporting of events, which seem to harbor a more insidious intent, generally covered up by secret State apparatus.

He further pointed out that several of the 911 hijackers have turned up to be alive and well; a facet about which the Saudi government has done nothing about (them being Saudi subjects). Thus, the Saudis, through the silence, not only allow the “War On Terror” to continue, predicated on false premises, but also wage a war OF terror on Muslims, utilizing their Wahhabi “ideology.” 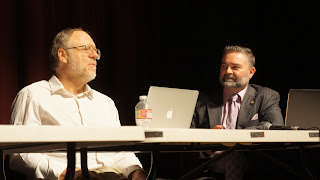 The next speaker was Dr. Kevin Barrett, who made some delightful comparisons in regards to decline and fall of U.S.-Saudi alliance. He deemed that as U.S. domination of the world is in decline, so is the Saudi domination of Islam. And, that it is this alliance that has led to rise of the Saudis, both of whom depend on excess wealth.

The failed U.S. adventures in Syria, Iraq, and Afghanistan are mirrored with Saudi misadventures in Syria, Yemen, Bahrain, and with Qatar. As both have funded cultural imperialism of their own, the U.S. with its consumerism model of MacWorld and the Saudis with their Jihadi Wahhabism. Thus, creating a clash of fundamentalisms.

Thus, emanating from this hypocrisy is official lies versus sorted truths, which defines the many shared dichotomy between the two countries, that raises the question as to which of these two powers will fall first.

Both societies are seeing division and fracture. Both are becoming subordinate to Likudnites in “Israel.” Both are losing their hegemony, as China is rising in power.

Will U.S. & Saudis cling to each other in the drowning process? As the selling of Aramco is blowing up the Petro-Dollar and enhancing the fall of the U.S. empire. 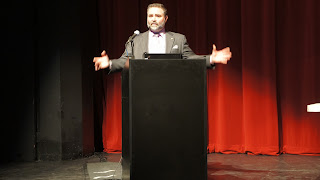 The last speaker was Dr. Scott Bennett, who with top security clearances was a witness to U.S. backing of War OF Terror on Syria, while investigating terrorist financing. He said, 911 has made a shadow of what our country was.

The Saudis, driven by Wahhabis, have divided the world into war and Islam, filling every Think Tank in D.C., they are deemed as doing no wrong. And, United States, in following the dictum that the enemy of my enemy is my friend, have chosen House of Saud that is the enemy of everybody.

He felt that the Saudis would fall first and that with the rise of Russia and the coalition around it are going to destroy the “Rebel-Alliance” that the U.S. has built in Syria. And, that we need new blood in the U.S., new leaders that can stand for the truth and build better relations with Russia and Iran, dropping the backing of House of Saud.

He promised to run for Congress, in his State of California, in hopes of effecting this change in policy.

Afterwards, the audience had a chance to ask questions, during which some interesting topics were raised. 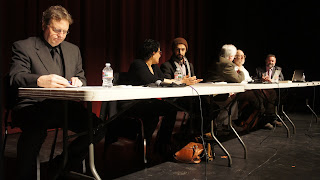 Popular posts from this blog

April 07, 2017
Roots Of Conflict, hence
Report on March 18th, 2017 conference Heritage of Colonialism in the Arabian Peninsula: Past and Present

“The roar of the words is stronger that the sound of bullets” and“The whole oppressed should unite and stand together against the oppressors” -  Martyred Sheikh Nimr al-Nimr
As Mohammad al-Nimer, the son of the martyred Sheikh, recites his father’s words at the conference.
Roots Of Conflict (ROC) came together via November 19th 2016, Roots of Terrorism Conference.  There, a group of us decided that the focus should not be on ideology of terrorism and instead to explore the entities and histories behind the phenomenon.
Thus, ROC was formed and as a first project, the March 18th 2017 conference was launched:Heritage of Colonialism in the Arabian Peninsula. Here, the focus was on the Saudi regime rather than ideology, whose presence is questionable. Besides, trying to fight notions is like shadow boxing; As, we believe, ideas are in a realm beyond space and time.

Post a Comment
Read more
April 01, 2017
إنا لله وإنا إليه راجعونWe belong to Allah and to Him we shall return
It is with great sadness that Roots Of Conflict (ROC) offers its heartfelt condolences to Muhammad Nimr, the son of martyred Sheikh Nimr al-Nimr, for two of Nimr’s cousins, Muhammed and Muqdad, executed by the Saudi regime, this time without even the pretense of a trial (for reference see article linked below).
We hereby condemn these terrorist acts of the Saudi regime that has affixed the word “Arab” to its criminal “royal” pedigree. Furthermore, we condemn Saudi regime’s acts of terror, war, and aggression, whether they be in Hijaz (renamed Saudi “Arabia”), Bahrain, Syria, Yemen, or anywhere across the world.
In the end the Saudi regime is naught but a petty progeny of world imperialism and mere frolic for its masters that have nurtured, suckled, and continue to maintain it.  This relation explains why, for the very greatest and vast part, the victims of terror are Muslims. A relationship that is otherwise used to …
Post a Comment
Read more